In an industry that still prefers its female stars quietly compliant, Mae Muller is the most enticing of propositions: a rising songwriting talent intent on telling it precisely like it is. Frank, funny, and endlessly relatable, the Little Mix and Sam Smith-approved singer is breathing new life into pop with her street-smart yet soulful compositions, and empowering others to speak their truths in the process.

Sat in her local today - just a stone’s throw from where she grew up in North London - the 24-year-old admits that this directness didn’t always come naturally to her. “There have been a lot of times in my life when I haven't stood up for myself the way I wanted. So, I use my music now almost as a kind of armour, and maybe as a way of being the voice for someone else who doesn’t feel like they can speak up yet.”

Though she fondly recalls the music of Prince and Sade soundtracking much of her childhood, it was creative writing - and not music - that was Mae’s first love; a fact that follows when you consider her storytelling prowess today. But as she began discovering her own songwriting heroes in Gwen Stefani, Florence Welch and Lily Allen, the balance ultimately shifted in favour of music.

Remarkably, Mae was 19 before she wrote her first song, ‘Close’, which was produced by a family friend, “paid” for with wine in lieu of actual money, and created an immediate industry buzz once uploaded to Soundcloud. Looking back today on her relatively late start in music, Mae has zero regrets. “I feel really lucky that in a way I've lived a relatively normal life,” she smiles. “All the friends I have, I've had for fifteen to twenty years and I think that's really, really important, especially in this industry. Plus, I can draw on experiences I had when I was 15, because I was running around and doing whatever I wanted, and nobody was looking at me.”

This unfiltered approach has informed Mae’s output since day dot. Debut single ‘Jenny’ found her befriending the sidechick of her two-timing boyfriend, while ‘Side Piece’ from 2018’s aptly-titled ‘Frankly’ EP saw her putting her overkeen lover in his place with lines like, “The only thing I need to know is where your bed is.” On her newest releases she’s going even further.

Dissecting dysfunctional relationships and inconvenient emotions with wit and verve her recent EP, no one else, not even you marked a new creative peak for the North Londoner. There’s ‘plot twist’, a disarmingly sweet bop about unwittingly catching feelings, which provides the perfect contrast to the brilliantly brutal ‘work like that’, in which she rejects the advances of a cheating suitor with acerbic swipes like, “Get a life, you’re fucking 33.” And in the DallasK-produced ‘HFBD’ she’s written the ultimate anti-birthday anthem. Sonically, the seven-song collection was a huge step forward too, finding Mae’s supple vocals as suited to trap beats as they are funk guitar or acoustic pop, and featuring songwriting collaborations with Rick Nowels (Lana Del Rey, Dua Lipa), Kenny Beats (Aitch, Dominic Fike, FKA Twigs), Skyler Stonestreet (Ariana Grande, Justin Bieber) and Amy Wadge (Ed Sheeran). And, as Mae explains, the conversational title of the collection is intended as an expression of self-love. “Obviously a lot of my songs are based on personal experiences, but I asked so often, who is this song about now? And I'm like, you're putting the whole narrative around other people: this isn't actually about anyone else - this is about me and my feelings.”

Following the release of the EP, Mae has gone on to release some incredible collaborative singles in the past year seeing her team up with chart-topping duo Billen Ted for “When You’re Out” and renowned rapper Big Zuu for their joint single “I Did It”.

Most recently Mae released “Better Days”, a joint single with NEIKED and Polo G, which rapidly garnered astronomical success across the globe following a viral moment on TikTok. The song has received over 240 million streams since its release last October and subsequently saw Mae make her debut in the Billboard Hot 100 with the song climbing to #23. Elsewhere the song has been the #1 most added at US Radio for 2 weeks in a row and seen her perform on Dick Clark’s New Year’s Rockin’ Eve and The Voice US as well as Sunday Brunch in the UK.

Ahead of her forthcoming UK tour in April, last summer saw Mae take to festival stages across the UK to huge crowds including the likes of Reading & Leeds, Bestival, Latitude and Sundown Festival. Mae will also be taking to the road across Europe this November seeing her perform six shows across Paris, Germany, Belgium and the Netherlands.

Mae might not be seeking anyone else’s approval, but she’s already received co-signs from Little Mix - who she opened for on their UK arena tour - and Liam Payne - who personally picked Mae as the only support act for his live-streamed birthday show. Experiences like these have only strengthened her own determination to headline arenas. “That is the goal. And I have no doubt that it will happen. It's just when. I want to tour the world. I want Grammys. I want BRITs. I feel like I can do it so I don't see why not?”

But mostly she wants to instil the exact same fearlessness in her fans. “As a young woman growing up, you're going through so many different things at once so I think to have another little voice saying, ‘You can do this, you're amazing,’ is always a help. I just want people to know that they're worth so much more than what has happened to them. I know that's my reason for doing this, and I think once you have a reason and a drive everything else falls into place.” 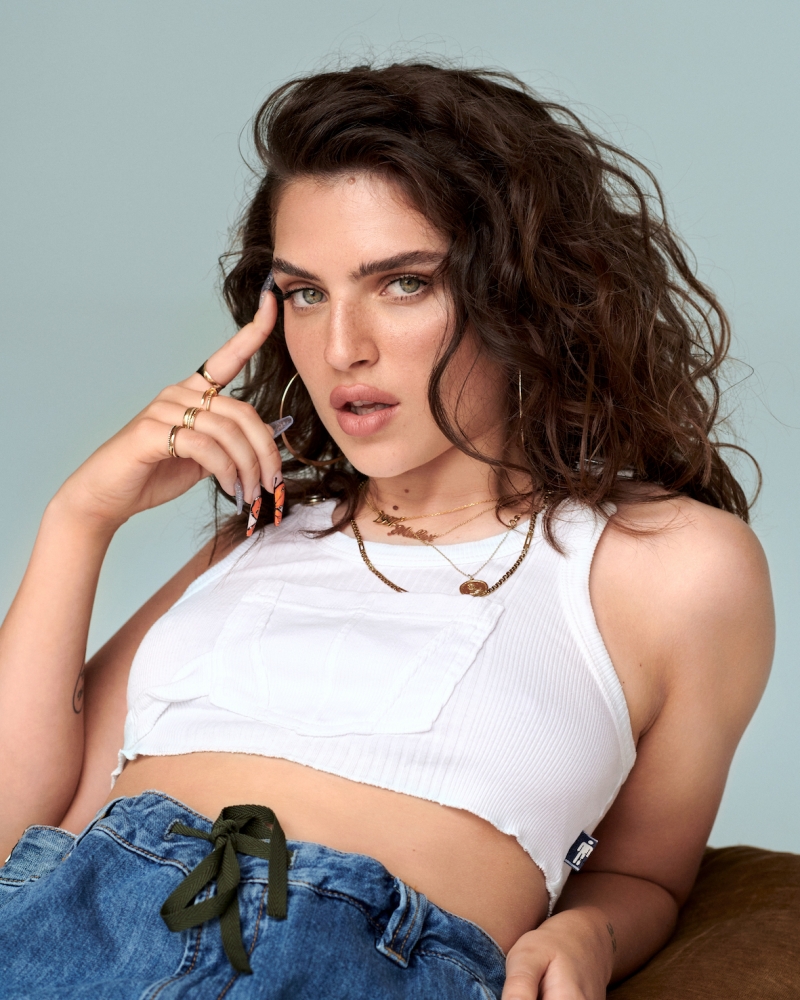