Lazygirl is the musical project of 21-year-old Beth Harris. A songwriter from a young age, Beth began producing her own music at 17 with the help of a group of female and non-binary artists and producers including Clairo and Sophie Meiers. Now, with over 500,000 Spotify streams, Beth has established herself as a dreamy bedroom artist, with smooth melodies, lo-fi production and quirky drum samples—solidified by becoming part of the roster of LIMF Academy’s class of 2021. Lazygirl sets herself apart with down-to-earth lyricism about important topics. When asked about why her artist name is Lazygirl, Beth explains: “At the time of starting the project, my mental health was at an all time low. I suffer with depression and anxiety, and when I would have no motivation to do the smallest things, I would often berate myself as “lazy”. It sounds so cheesy, but learning to create my own songs from scratch gave me such a valuable outlet for my thoughts, so I reclaimed the word as something positive.”

Mental health is central to Beth’s musical identity. Her most popular song, ‘Lava Lamp’, standing at over 130,000 plays on Spotify, is about feeling completely enveloped by depression—as are many of the songs on her debut EP, Juniper.

Lazygirl’s music also discusses topics crucial to Beth’s identity as a bisexual woman and feminist. Her song ‘I’m Still in Love With You’, featuring Aira and produced by doyouloveme, has been praised as a love song between two women, and Lazygirl’s debut song ‘2 Know’ is about Beth coming to terms with her bisexuality. Branching out to more serious topics with her 2020 EP Orange Roses, ‘Coughing Fit’ explores the experiences of female sexual assault victims, and ‘Sunburn’ discusses government incompetence and capitalism. 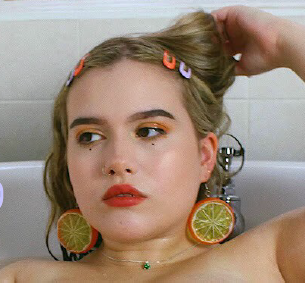