Following the huge success of the monthly spoken word night ‘A Lovely Word’ at the Everyman Bistro (1 st Thursday of the month), we are bringing you spoken word poets spanning the political, personal and downright silly when it comes to word spinning. Hosted by the esteemed Alex Ferguson (‘Hilarious’ ‘Bizarre’ ‘Who is this person and what is he doing on my stage?’) expect to be thoroughly entertained. Supported by Arts Council England and Everyman Playhouse.

A powerful performer and would create a inspiring and light atmosphere at the festival https://saltwaterpoetry.com/
credits in working with: Liverpool City Council (Performing at the Impacts 18 Conference) Wigan City Council, Regenerus, Writing on The Wall, Liverpool Pride,Merseyside Young People’s Association, FACT Liverpool, Rapid Response News, and Alternative Fashion Fest.
Her notable performances have been at: Sound City, Threshold Festival, Spoken Weird, Edge Hill Literary Festival, Writing on The Wall, The Last Word (support act for Debris Stevenson) The Axis Slam and The SAN Conference. Her work has been published in; Womanly Words (Shakti Women), What’s Your Pride Story (Writing on The Wall) and Liverpool Luna Collective (Blog post)

A young and political poet often writing about and getting involved with extinction rebellion.
A poet based in Liverpool who participated in the BBC Words First scheme this year, and one of the 12 poets featured in &#39;Use Words First&#39; anthology.
https://www.facebook.com/heidihenderspoet/?ref=br_rs and
https://www.youtube.com/channel/UCMPfXiY4-y5odzH

A humorous and larger than life poet who is incredibly performative. Terry has been poet in residence at the National Football Museum, Bridgewater Hall in Manchester, National Coal Mining Museum in Wakefield and Citadel Theatre in St. Helens. Terry was commissioned to write by the Roald Dahl Foundation and had the lyrics to one of his songs chosen to be one of the official children’s songs for the 2012 Olympics. Terry has won many awards over the years and receives excellent feedback from his events.

Will be performing some of his hilarious existential poetry looking at life as he sees it.

Matty is a Merseyside-based poet and spoken-word artist. He has headlined A Lovely Word, and is the founder, co-organiser and former-host of The Poet Tree nights in New Brighton, Wirral.

Benjamina sat in the transport office she managed, eating muesli from a glass jar, daydreaming about spreadsheets and policies, and wondering whether there was more to life. Then a light flashed before her eyes: a WhatsApp message. ‘Free writing course in Liverpool?’ She hesitated; fear runs deep. But then, so does hope. Almost two years later, she still has the office job and her plastic-free lifestyle, but she’s now less afraid of the words that haunt her. Harnessing the hopes and fears that compete for her mind, she’s held feature spots at Manchester’s That’s What She Said, is a regular at Liverpool’s A Lovely Word, and enjoys sharing her queer weirds inspired by folklore and spontaneous human combustion

Becky Brookfield is poet, writer and performance artist. Based in Liverpool, UK, she is one of the organisers of A Lovely Word spoken word night at The Everyman Theatre. She has hosted Curse Words poetry night and performed at Secret Circus. Becky has worked as a writer and director with Creative Europe and Arts Council funded projects such as ViSet project with The Lemon Collective

Felix is a 19 year old transgender man actor/writer who is signed with The Queerhouse London. Having graduated from LIPA Sixth Form College, he is hoping to take his queer writing and performing to larger stages.

Stephen Wright AKA “Ste the Poet” is a Merseyside-based poet. His high energy spoken word performances are always a huge hit audiences at poetry, comedy and music events across the North West. He is currently on the A Lovely Word Poet Development programme, has headlined renowned Liverpool Spoken Word Night Liver Bards, and has featured on Halifax’s Spoken Weird.

Ste's upcoming feature appearances include a featured appearances at the last night of the Cheltenham Poetry Festival (25th April 2020), and Liverpool Sound City (2nd of May 2020).

Alex is a performance poet, host and producer of the critically acclaimed A Lovely Word, the Liverpool-based spoken word night and artist development programme. His poetry often deals with aspects of shame and privilege in a self-deprecating and comic way. He is also producer of Perhaps Contraption and Homotopia, and regularly facilitates workshops at the Everyman Playhouse and Collective Encounters. 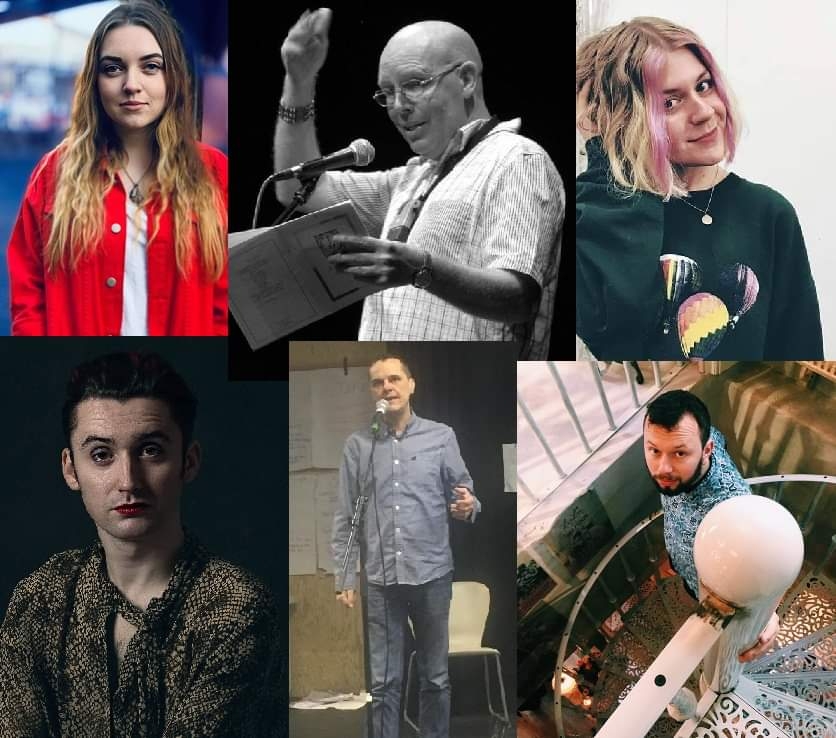