Named after the classic 90’s Nokia phone, 32 tens are a retro video games and music obsessed indie outfit from Warrington. The band pioneer a unique blend of sing-along northern indie anthems with modern urban lyrical flows and authentic themes. They played their first gig in September 2017 to a crowd of more than 3000 people supporting Billy Bragg and Maximo Park.

Their first single Insane Asylum was released the same month followed by Lost in October which, by the close of 2018 had been placed in the top-ten most streamed tracks from Spotify’s Indie Lists for the year alongside the likes of Blossoms and The 1975. With a steady stream of releases to their credit, their most recent single What’s Going On was out on 18th January 2019.

‘Watch out for 32 tens in 2019; the boys have set Spotify on fire this year and are sure to do the same at venues across all over the UK 2019. Ones to watch’ - Gigslutz

Present by Distiller TV & Scruff of the Neck 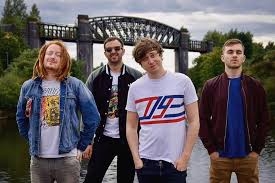