Sound City is thrilled to announce its first headline act for 2023. Maisie Peters’s innate talent for storytelling and crafting relatable songs has seen her rack up over half a billion streams globally. Having ascended from busking on the streets of her hometown in Brighton, Maisie has sold out London’s Shepherd’s Bush Empire and headlined her own U.S. tours. Maisie’s acclaimed debut album shot straight into the Official Charts at No. 2, every date on her headline tour sold out in 1 minute and she released a string of tracks including ‘Cate’s Brother’, ‘Blonde’, ‘Good Enough’ and ‘Not Another Rockstar’. This will be Maisie’s only North West show of her current tour, headlining Sound City’s Main Stage - presented for this year’s festival in association with leading North of England-based premium fashion retailer Tessuti.

Joining Maisie on the Sound City bill for 2023 is Beren Olivia. Beren is one of the UK’s most exciting rising alt-pop stars who has surged from zero to nearly 16 million streams in just a few singles and is tipped by Radio 1’s Jack Saunders. Courting is leading the charge in a new wave of great emerging scouse bands, releasing their debut album ‘Guitar Music’ to rave reviews. Fans will be treated to a hometown gig packed with infectious bangers from the band. Delights come fresh off the back of a run of headline shows in the UK. With their eclectic melodic indie, psychedelic guitar sound, Delights join the line-up for Sound City Festival. EEVAH is the musical collaboration from Embrace’s Richard McNamara and singer songwriter Nicole Hope Smith providing catchy alt-pop goodness. Having toured with Duran Duran this year, and releasing single Wild Things in August, this is the time to discover EEVAH. Rapper Finn Foxell recently dropped track What’s Your Poison, and is set to bring hazy hip-hop, electronic vibes to Sound City along with Malady, the London band effortlessly fusing electro dance with indie guitar music for a unique rave-indie live show.

Mollie Coddled is the Leeds star who’ll be providing infectious dream pop, intimate lyricism and summer sounds as her star continues firmly in ascent. Opus Kink is the punk-rock Brighton collective rapidly gaining attention for unashamedly thriving in front of a live audience - fans can expect to be whipped up into a raucous, high-octane set at Sound City next year. There’s even more Liverpool talent joining the bill for 2023, including Re6ce. At just 17 years old, Re6ce has already cemented himself as one-to-watch, delivering his blend of d’n’b tinged pop. Liverpool five-piece guitar band Reignmaker will make their Sound City debut. With their first single Hope I’m Not Alone released this summer, fans can expect youthful exuberance from a band raring to take the festival scene by storm. Canadian-British electronic-punk band Shelf Lives will also make their Sound City debut. The duo released Skirts & Salads just last month, and will undoubtedly put on a chaotic, energetic performance next April.

SOFY joins the line-up for Sound City. Indie-pop fans can look forward to SOFY’s self-penned pop bangers including Strawberry Milkshake and Lads! Lads! Lads!, laced with infectious melodies and sing-along lyrics. THE GOA EXPRESS are the hotly-tipped five-piece who are sure to be everyone’s new favourite band after Sound City. With spins from new music tastemakers Steve Lamacq and Jack Saunders, expect to see much more of the emerging garage punk band. Already working their way to the top of the charts, Trampolene’s debut album ‘Swansea’ stormed to #10 on the UK Indie chart. Fronted by Jack Jones known for his spoken word poetry, Welsh alt-rockers Trampolene join Sound City 2023. Welsh indie quartet The Royston Club made their first Sound City appearance in 2022 and with their name still hot on the lips of new music lovers, the boys are set to make a welcome return to Liverpool next year.

Sound City is proud to be the UK lead festival for Keychange, the global movement to champion gender equality in music. As part of this essential, industry-leading initiative, Sound City pledges to be gender balanced, reflected across its acclaimed, diverse festival lineup and wealth of expert conference speakers and creative minds. In 2023, the festival and its accompanying conference continue striving to achieve just that within the lineup, Launch training and artist development schemes, staff, music board and beyond. Year-on-year, this is a major focus for Sound City, a festival which is dedicated to achieving the Keychange pledge in all aspects of the festival and its wider work.

Sound City Festival will take up residency at a new home on Saturday 29 and Sunday 30 April 2023. Mountford Hall at the Liverpool Guild of Students will play host to festival goers next April. One of the city’s biggest live music venues, steeped in musical history with artists from Queen and The Buzzcocks to Jessie J and Dizzee Rascal having taken to Mountford Hall’s stage over the years. The venue boasts a state-of-the-art light and sound system, and is just a 5-minute walk from Liverpool city centre.

In another new addition for 2023, Sound City Festival will be bringing New Music Friday to Liverpool. Venues across the city centre will be abuzz with a raft of world’s best emerging acts and up-and-coming artists on Friday 28 April. What better way to celebrate the start of the festival than with a one-day new music showcase rounding off the one-day conference. Sound City+ Conference, founded to champion the rich and diverse creative output of the North of England, while welcoming and celebrating exciting artists and leading executives from all over the world every year, will also take place that day with more details to be revealed very soon.

As ever, Sound City Liverpool will be presented in partnership with an array of brilliant funders, partners and sponsors - some long-time friends and others brand new for 2023. Sound City welcomes leading premium fashion retailers Tessuti and scotts as joint Headline Sponsors of the Main Stage and is delighted to continue its partnership with SAE Institute Liverpool as Principal Creative Media Education Partner. Innovation Partner is Amplead and the Apply to Play scheme is sponsored by Tunecore for the second year running. Sound City wouldn’t be possible without the generous support of Arts Council England and CAPLL Ltd. 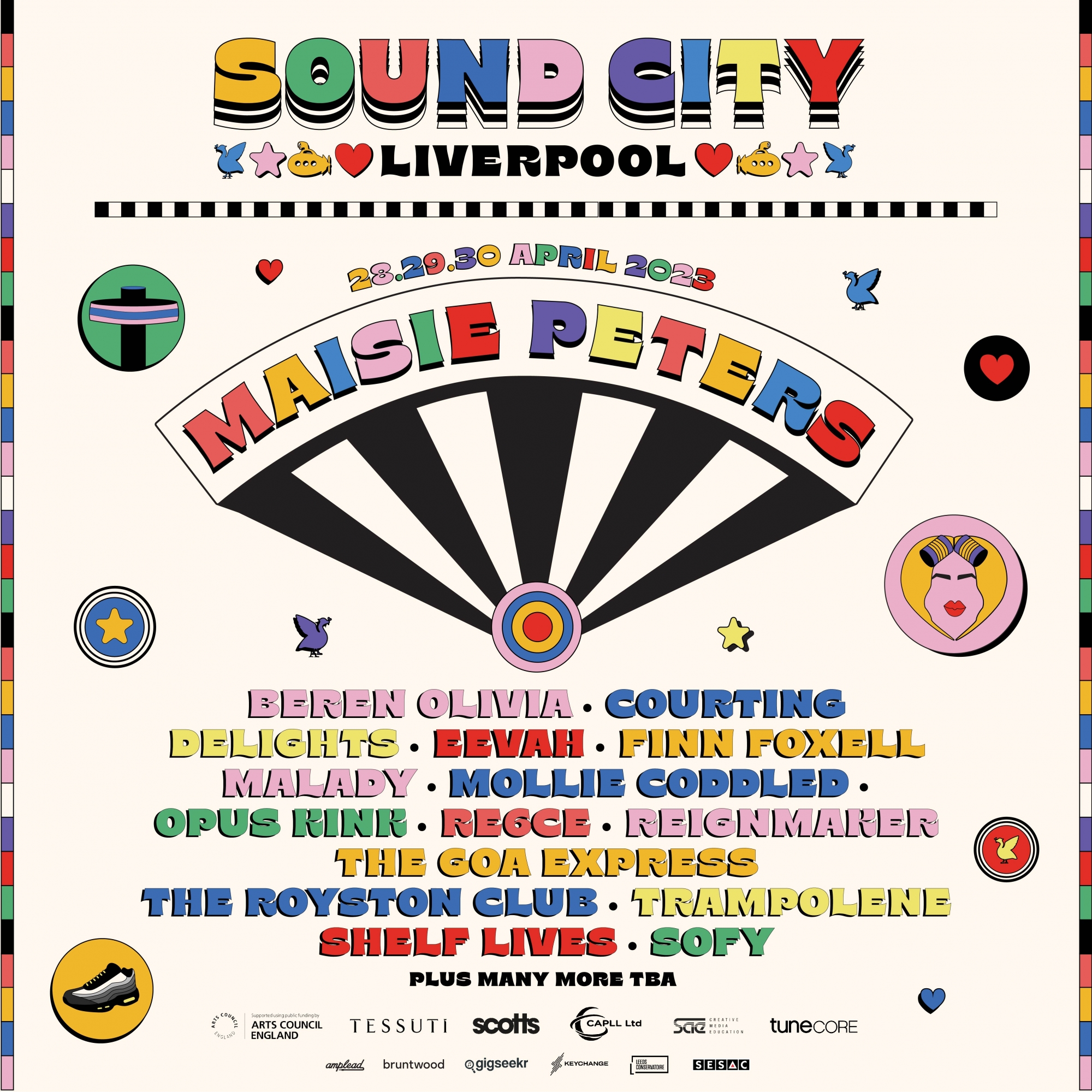